Get fresh music recommendations delivered to your inbox every Friday.

Hang on for the Ride 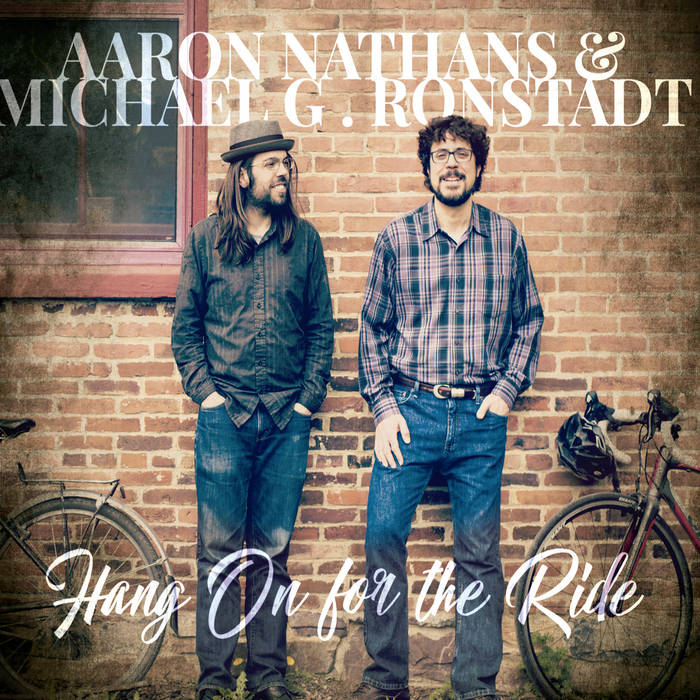 With their much-anticipated second album, “Hang On for the Ride,” the dynamic cello/guitar duo of Aaron Nathans & Michael G. Ronstadt push the boundaries of folk music with a creative, adventurous, and wildly enjoyable new work.

Their previous album, “Crooked Fiddle,” was a surprise favorite among folk music fans. The album fused nostalgia, emotion and musical virtuosity, alongside songs that got stuck in your head in the best way. Most importantly, the music was authentic -- sparse, brilliant and honest.

But for two artists who believe in challenging themselves, making the same album twice was out of the question. For a follow-up project, they would channel the immediacy of their live shows, which are always exciting events. They would push themselves musically, with complex orchestral arrangements that sound deceptively simple.

And in keeping with their commitment to honesty, the music would reflect the challenging times during which it was made. The recording of this project paused last summer when Michael’s father and namesake, the great Michael J. Ronstadt, died.

The resulting album is a portrait of contrasts, darkness and light: young love, ghostly photographs of old friends long gone, and the urge to run away to find peace and safety. Nathans & Ronstadt venture into lyrical corners other songwriters would never dare: peanut allergies, or climate change rendered as a hallucinogenic carousel ride. The Queen classic “Another One Bites the Dust” is recast as a jazzy murder ballad.

The title track talks of hanging on through tough times. And the leadoff song, by the elder Ronstadt, is a vision of making one’s way through the snowy North, as seen through sun-kissed Southwestern eyes.

Michael, who hails from his famous Arizona family, now lives in Cincinnati, where he is a sought-after cello teacher and mentor. He is also a member of the Ronstadt Brothers (formerly Ronstadt Generations) and Serenity Fisher & The Cardboard Hearts, and also works with Craig Bickhardt and David Trotta. Aaron lives with his family in greater Philly. He also performs solo and, along with Avi Wisnia, founded and leads the Philly Songwriters Circle, a song critique group. He has been a Kerrville New Folk finalist.

Nathans & Ronstadt were named Best of Philly Folk Fest by Philly CityPaper in 2015. Michael Tearson of SingOut! Magazine wrote of “Crooked Fiddle”: “This is an engaging, warm and intimate collaboration between songwriter Aaron Nathans and songwriter/ multi-instrumentalist Michael G. Ronstadt... Throughout the songs are stirring and they leave you thinking. A thoroughly satisfying and stimulating effort.”

And Matt Casarino of the Delaware comedy duo HotBreakfast! wrote: “Aaron and Michael are amazing musicians and songwriters. Their first album ‘Crooked Fiddle’ is a masterpiece of modern folk - beautiful, introspective, funny, earthy, and wonderful... I want another album from these guys, and soon.”

“We think Aaron’s journalistic storytelling skills paired with Michael’s unique instrumental (and songwriting) chops will continue to spin gold for as long as they choose to work together — a lengthy time, we hope!”(Richard Cuccaro, 2015).

“Nathans and Ronstadt are cashmere. Music you would want to get closer to and not be overwhelmed by. The well-thought-out approaches here are smooth with poignant tales filled with sincerity. Like many Bob Dylan, Leonard Cohen, and Tom Waits songs, these tunes can linger in your ears and follow you into bed where you will be looking up at the ceiling with your eyes closed in the dark and the melodies still partying into your sleep.” – John Apice, No Depression review

“This is an engaging, warm and intimate collaboration between songwriter Aaron Nathans and songwriter/multi-instrumentalist Michael G. Ronstadt... Throughout the songs are stirring and they leave you thinking. A thoroughly satisfying and stimulating effort.” - Michael Tearson, Sing Out! Magazine review

Crooked Fiddle debuted in September 2014 to #12 on the Folk DJ charts, with the first single, “Old Joe’s Chair,” debuting at #10. It continues to garner radio airplay on multiple formats worldwide. "This new CD from Aaron Nathans and Michael G. Ronstadt, 'Crooked Fiddle,' deserves your attention. Michael and Aaron have teamed up to create a powerful work of art that I guarantee will move you." - Ron Olesko, WFDU's "Traditions."

“Like hydrogen atoms when they fuse, they release tremendous energy. Musically, they come from different worlds. Aaron is a clever songwriter whose greatest strength is his wit and use of language. Michael is a conservatory trained cello virtuoso who reveals a winning playfulness when he performs… They take your mind places it has not been before.” – Gordon Nash, Wise Madness Blog

Aaron would like to thank his patient, supportive, and loving bride, Debra; L&C; Mom & Dad; Jenny & Jon; Pop-Pop, Grandma
Judy, the Neffs and the whole family. Also thanks to Phil Henry, Scott Wolfson, Avi Wisnia, Johnathan McCullough, Serenity
Fisher, Petie Ronstadt, Mark Croft, Reggie Harris, Julia Bernd, Nik Everett, and everyone who has been so supportive of this
enterprise. And thanks to the incomparable MGR. Remembering Harold Nathans, Gary Krasnow, and Marybeth D’Amico.
This album is dedicated to Michael Joseph Ronstadt, Michael G. Ronstadt’s late father.

Michael G. Ronstadt has been captivating audiences throughout North America for nearly two decades. A master at his craft, Ronstadt traverses a mélange of musical styles that range from anywhere between folk, jazz, classical, Americana and the wildly ethereal. He lends his talents to a broad range of projects, including solo work and a variety of small ensembles, as well as larger bands. ... more

Bandcamp Daily  your guide to the world of Bandcamp